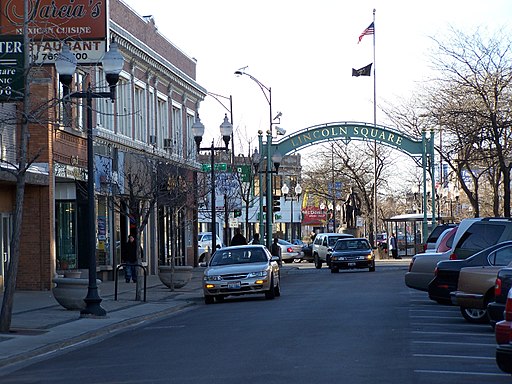 In the 1920s, the University of Chicago separated the City into area areas, one of which was Lincoln Square, which included the existing Ravenswood community. Although sometimes being called using those other designations, the Lincoln Square name was made official in 1925.

Approximately 44K people live in the neighborhood with over 1,000 small to medium size companies. You can get there suing the Brown Line of the ‘L’. The community’s borders are defined by Bryn Mawr and Peterson Ave. on the North, Montrose Ave. on the South, Ravenswood Ave. on the East and the Chicago River on the West. The are consist mostly of the single family and small multi-unit structures. A lot of those properties are masonry and require periodical tuckpointing and other service to maintain their sound integrity.

The heart of Lincoln Square is at the junction of Lawrence, Western and Lincoln Ave. You’ll find a wide variety of dining establishments and stores on Lincoln Ave going South from the six-corner junction. Lincoln Square is traditionally referred to as a greatly German influenced and inhabited community, and in the past several years also welcoming the Thai culture.

Lincoln Square is also a place that holds variety of festivals and live music events on seasonal basis. One of the very well-known ones is the Apple Fest, that brings the neighborhood together in celebration of the beginning of fall. Every summer, the Lincoln Square organizes the Square Roots Festival, dedicated to German culture.

Not sure if you need masonry, tuckpointing, concrete, or porch service in Lincoln Park?

Our office is very close to Lincoln Park, if you’d like to talk to us and schedule masonry evaluation and / or tuckpointing service of your Lincoln Park property. Check the map below and give us a call if you need some more information.